Why is there a cow in there?

Because Jesus was born in a barn with all the animals.

But one of the cows might think he was hay. That's the problem when you have cows because they don't know very much.

The First Day of Winter 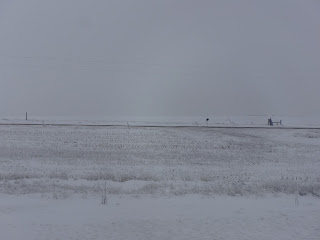 A Word from Germany on the Migrant Crisis

...integration only works if the state doesn't lose control, and Germany at present has lost control. Of course there is a basic human right to asylum, but without an upper limit -- enforced, if necessary, with border controls -- it will be almost impossible to find a way out of the crisis.

This is well said because it provides unpolarized recognition of both the crisis and the plight of refugees, when either element is often denied or ignored.

Read the rest here ("Reflecting on Refugees: A Plea for Measured Debate").
Posted by Nick at 9:18 AM No comments:

A Child's Guide to Advent

"I like Advent because we get chocolate every day."

Greg R. Lawson writing for The Hill raises an intriguing possibility for the future of the Middle East :

It is not difficult to envision the Syrian Kurds striking a deal with Russia to gain more autonomy, up to and including a de facto state. This is something the West can't do given ties to Turkey and fears of a spillover effect into Turkey itself... Over time, this could represent the beginning of a literal carving up of chunks of southern Turkey.

This would not happen immediately, but Putin can afford to be patient.

The United States has not supported an independent Kurdistan, likely because of a desire to see Iraq succeed, but how exactly does the country that went to war to create Kosovo tell the Kurdish people they don't deserve a state because Turkey is our (dubious) ally?
Posted by Nick at 6:00 PM No comments: